After many months of planning and plotting and conjuring evil dark forces with a few selective friendly contacts of the Audiência Zero collective, the day finally arrived where we head out for 1 week residency with members form all of our three hacklabs: LCD from Porto, AltLab form Lisbon and our very own xDA from Coimbra.

I managed to setup a ride with a couple of the big bosses from LCD, mister Ricardo Lobo and Pedro Angelo. I waited for them the entire morning, still slightly recovering from Saturdays photo exhibit opening at Galeria Icon (where xDA colaborated with Sue doing some dj’ing and projection mapping). Phonecall revealed they were already running late and suffering a major setback, a forgotten wallet, forcing them to go back to Porto.

People from the other labs were already moving around working on some of their own projects: Mónica greeted us outside where she was testing the wifi access distance for her tree project. And inside we unraveled the AZ room where Guilherme was botching latest robotic creature and Catarina greeted us with a handshake using her latest speedproject, a glove with a led that lights when you shake hands. Filipe was setting up his fish tracking system in a corner. Mauricio, Sérgio and Tara were also around doing their own thing and others are scheduled to show up through the rest of the week.

Quick tour of the location revealed it to be pretty cool. A rehabilitated convent inside a typical Portuguese castle with an overview of the entire city. Plans for sightseeing abit aren’t entirely out of the question but we are mostly all really eager to get down and dirty with the technology.

Sitting down we finally start to assimilate all the potential: We have a Makerbot table for 3d printing. A microwave oven, some starch, vinegar and glycerine to do some secret bio stuff (not breakfast pancakes). Toolboxes, components and PCBs for electronics fun and non profit. Plenty of project ideas involving data visualization, and fabric interfaces. And a very evil plan for collaborative sound synthesis that will hopefully involve the PA, some contact mics, random MIDI/OSC values from the running projects and plenty of laptops.

We can already present the first project, the White LED Red Glove quick project by Catarina and Isabel. Which it’ll be easier to describe by quoting her own description. 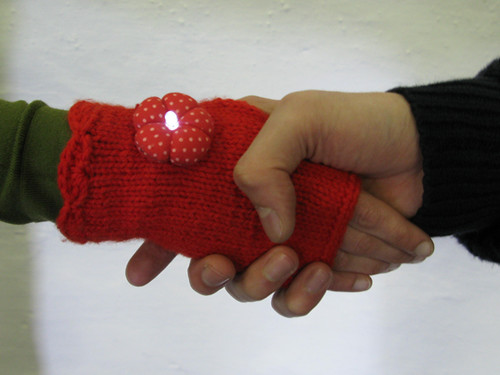 This mitten lights up when its wearer shakes hands with someone. It has two exposed soft contacts around the thumb and across the palm which, when bridged by bare skin, turn on the LED embedded on the flower. The mitten itself was created by fashion designer Isabel Tomás, and we then sewed a touch switch circuit onto it using conductive fabric and thread. Isabel and I designed this as a soft circuits exercise for some upcoming materials workshops, and we’ll post some instructions soon.