Cinder is a widely used C++ community-developed, free and open source library for professionals coding multimedia applications. Cinder Creative Coding Cookbook is all about getting started with Cinder. The book was written by Dawid Górny and Rui Madeira and published by Packt Publishing. It comes as a more comprehensive follow up to another book published by Packt about getting started with Cinder.

This book has 352 pages divided into 12 chapters, progressively covering from the most basic to the relatively advanced.

It will not teach you how to program, it will not do your project for you, it will not turn you into the uber cinder guru. What it will do is get you acquainted with the cinder developer environment, and give you a good insight on how to get the most out of using it. In short, if you’re a programmer looking to develop an interactive multimedia application with one of the hottest frameworks around this book should be more than enough to get the ball rolling for you with a small amount of time.

If you’re an advanced user of cinder looking to expand your knowledge you can find some solid example code references. The book includes plenty of example code and clear explanations of what does what. The chapters often include “there is more” sub-sections, pointing to additional information for advanced use.

I can tell you as an advanced user of cinder that this book does not cover all of the pitfalls and small annoying quirks, you will still have to put your foot in the hole and look them up on the online forum. But it does do a very good job at it’s main goal: being accessible and clear for the new user.

Some special featured sub-chapters like the MayaGui, OSC, OpenCV, Syphon integration are quite useful for folks who are interested in setting up those specific modules.

Negative mention to chapter 11, after reading the book description and considering how there were even a few chapters about getting OpenCV working with Cinder, one would expect some deeper examples on the topic of camera interaction. The examples are good, but the topic was hardly well covered, comparing for example with how well particles were. Similarly, regarding the Kinect, despite being a keyword on the book description, it’s only briefly covered in two examples, both of them using the official Windows SDK, ignoring all the work that has been done with OpenNI on multi-platforms before Microsoft launched the official SDK.

Positive mention goes out to the particles chapter(s) which are quite comprehensive. It includes both basic and more high level information, coupled with explicit example code, which you’ll find useful regardless of your prior knowledge on particles.

Overall i genuinely believe new people wanting to get involved with Cinder will find this book useful. 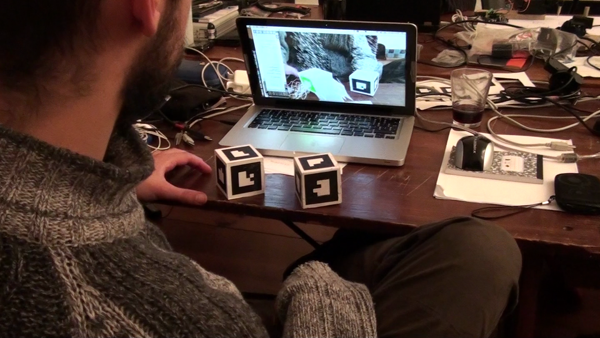 The AZ Labs residency at Espaço do Tempo in Montemor-o-Novo is sadly over for now. Folks have been working hard to finish things up for the proto exhibition of projects we had on Saturday.

A few projects were shelved or abandoned for different reasons. Not stable enough, not enough time, no right materials, not enough beer. In the end were left with 9 projects.

AR Cubes – André Sier developed a few experiments with cubes glued with printed augmented reality fiducial markers. Different markers trigger different effects. You can play with them to make different combinations of objects and lines interacting with each other. 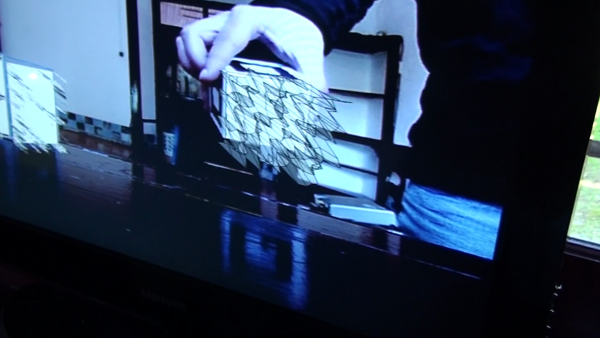 Tracking Head – Tiago Serra, Andrea Inocêncio and Mauricio Martins worked on a manequin head rescued during a dumpster diving session. They equipped a box with IR leds and use a camera with filters to track the movement of the box. With these values they send rotation information to a servo motor equiped in the base of the manequin head. The same values are also sent to a software that selects a corresponding angle photo which is projected in the manequin. This system makes the freaky manequin head rotate in the direction of the object.

Talking Head – Next to the Tracking Head we have a speaker box equipped wih an arduino, an ir receiver and a wave shield. When the box handled by the user aims at the speaker box it triggers random samples from a sample pool, giving the illusion that the head itself is talking. Mauricio, André, Filipe, João and Rita worked on this project.

Tracking Boids – The floor of the Tracking Head space is covered with small light spots flying around. These boids, programmed by André Sier may look like random disco lights on first glance but when someone moves into the camera they flock towards the user. 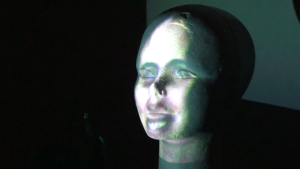 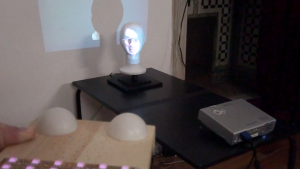 Micro CNC – Tiago Rorke had been working on a Micro CNC project, pieces printed with the Makerbot. Tereza Cardoso gave him a hand making a project out of it by taking photos of the attenders of the residency, downgrading them to vector format and having the micro cnc sketch them. They are drawn on the walls of the residency itself, along with qr code linking to video interviews talking about each persons involvement with the different projects. 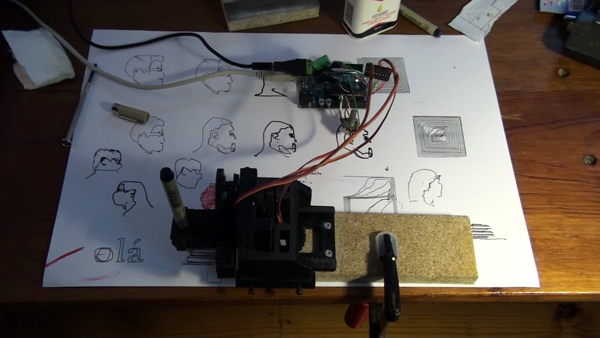 Paint Video Signals – Andrea Inocêncio recorded some short videos of red blue and black paint being applied to different mediums (water, paper, table). Filipe Cruz did a little processing sketch to extract midi values from a grid of pixels in the video and send them to reaktor. Some generative sound tests were recorded and mixed into a video dvd. 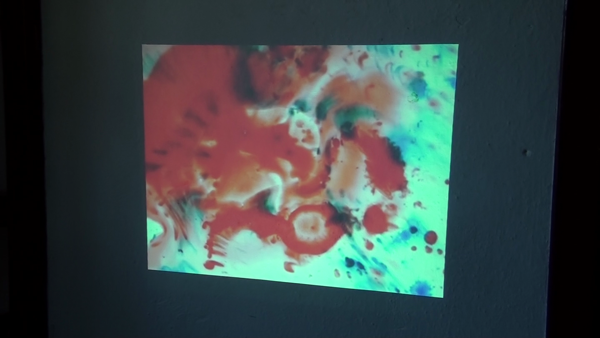 Blip Blop Blir Boxes – André Sier and Mauricio Martins worked on a few small boxes packed with an Arduino, IR sensors, LEDs and speakers. Boxes pointing to each other make the LEDs change their color. A third box pointed to the previous boxes makes them give out some blips and blops sounds. 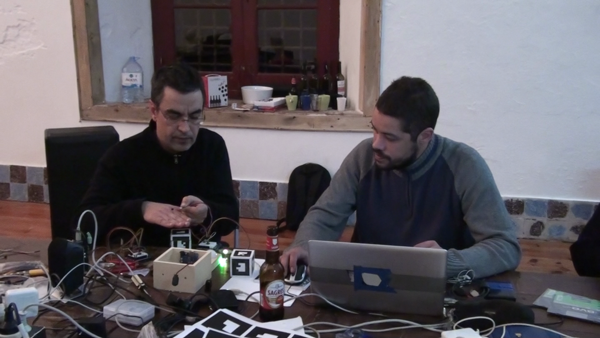 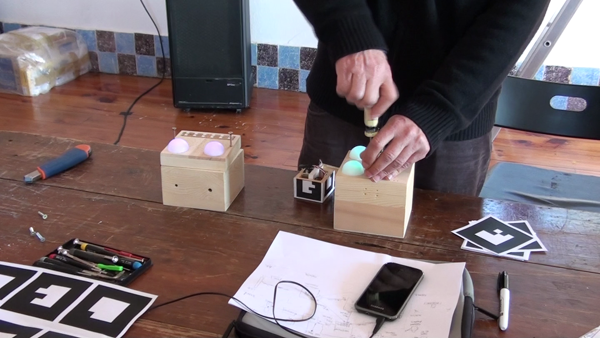 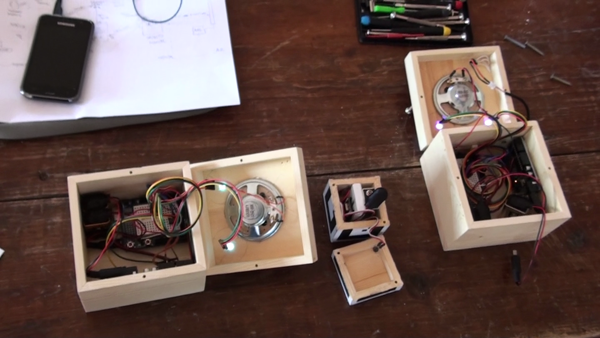 “O mundo é em cada instante o que ele não pode não ser.” – A project conceived by Patricia Proença consisting of a hand drawn animation of a tree growing being projected into a wall. The animation is triggered when a watering can equiped with a cellphone is tilted into an alien plant object. Tiago Serra gave her a hand with the technical implementation. 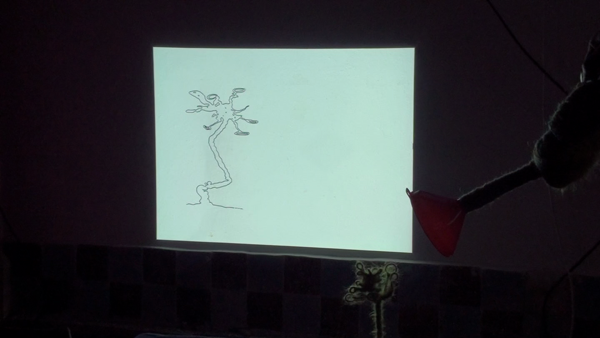 Trailchi – Guilherme Cartaxo and Sónia Malaquias been working for while on their project involving long exposions to tai chi sessions performed in the dark with a sword and suit equipped with 12 LEDs. The captured animations makes some beautiful light trails art. Also helps analyse the motion of the session.

Day three is already upon us at the AZ Labs Residency. Folks still happily hacking away day and night.

Run to the local chinese store brought back some hackable goodies like colorful balls, a giant rubik’s cube and some wooden boxes. Andrea Inocêncio was assigned to drilling duty after finishing up with the manequin head. Ricardo Webbens left behind his radio location arduino circuit prototypes for me to test.

César Coelho took the time to learn some new software stuff. Tiago Serra is currently trying to make the kinect and the arduino talk with each other and make some annoying sinus sounds. André Sier spent the afternoon hacking with Mauricio Martins programming the arduinos with ir detection to give some random blips and blops.

Tiago Rorke is almost finished with printing and sanding the hardware of his revolutionary Micro CNC. Ricardo Lobo tried desperatly to get the other Makerbot working. Pedro Ângelo seccluded himself to code some kinect stuff for Play With Fire. Filipe Cruz spent some time testing new versions of kinect libraries and random iPad development.

Ivo Andrade dropped by to enhance his project of the boy sitting on a metal cube. Patricia Proença sketched some concept art. Other folks were also walking around looking busy and discussing ideas. 7 more days to go.

AZ Labs are back in residency at Montemor-o-Novo. This time we are trying to have a connecting theme for the creative technology hacking insanity. The plan for the next 10 days is to brainstorm, conceptualize and prototype project ideas for tangible objects that can interact with each other and the environment. 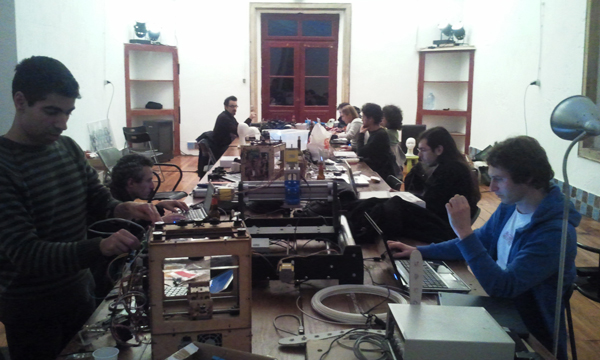 We have folks attending with all sorts of backgrounds: computer science, plastic arts, performance arts, electronics, industrial fabrication, graphic design, sound design, statistics, sociology. We barely had time to introduce ourselves to the first timers and new ideas are already brewing. Plans for infrared communication. Augmented reality environments. Radio signal triangulations. LED boards and cubes. Multiple kinect abuse. Let us wait and see into what these ideas will mature into.

Right now it’s 2 am, some folks already went to sleep while others are hard at work on personal projects. Using one of the Makerbots to print parts to build a Micro CNC. Trying to get the larger CNC working again. Hacking malfunctioning audio adaptors to create contact microphones. Implementing some tangible interaction with the kinect. Testing out some things with Arduinos. Failing to install ofxPTAM. The list goes on.

It took us a while, but practice makes perfect, and we’re now much closer to ridiculing Justin Bieber than we’ve ever been before!

You might have noticed what derived from our Residency @ Espaço do Tempo, a dozen projects from several folks spread over the 3 labs exploring the robotic, the interactive, the sensorial, the tangible, the generative, the audiovisual, the augmented, the provocative, the performative and a few other of all those dirty little words you so much secretly love hearing about. Don’t be shy now. Nothing wrong with getting a little tangible now and again. 😉

We even participated in a little exhibit last month at Pavilhão Atlântico to present these and a couple other works. And now we’re back with more weapons of mass destruction. And now, this very weekend we’re meeting up again for some holiday hacking follery at LCD to show some more of our projects and do a few mini-sprints. Feel free to join us. Lock up your geeks, we’re coming for them!