On the 25 and 26 January, AZ Labs showcased some projects at the library of Vila Verde. This showcase was the first step in a series of iniatives promoted by Casa do Conhecimento in Vila Verde in colaboration with Audiência Zero. 500 students from local schools were brought to a secret room in the municipal library to discover creative, artistic and open source applications of technology we had setup to show them. 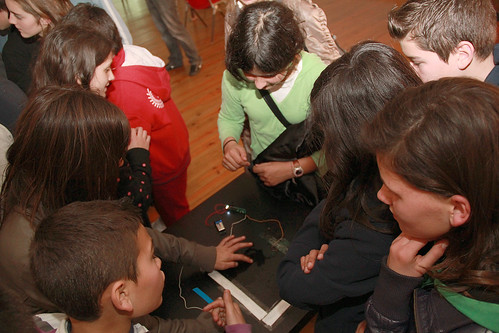 The response from the students, teachers and organizing comittee was great and we look forward to colaborate some more with the people of Vila Verde in the near future!

In total we showcased 7 projects.

Drawdio – An esoteric electronic instrument invented by some folks at MIT exploring the conductivity of graffite on paper or just common water. The user closes the electronic circuit through touch, triggering sound through a small speaker. Showcased by Ricardo Lobo and João Gonçalves.

AnonMirror – An interactive installation about social activism in our society. Made by Filipe Cruz using OpenFrameworks, Kinect and a wrapper developed by Victor Martins.

MakerBot – Ricardo Lobo showcased and did some live maintenance fixes on “Catarina”, one of the two AZ Labs Cupcake Makerbots we have. Printing some whistles and showingThingieverse.

New Picasso – A kinect controlled robot that paints the floor. Users wave their hands in front of the kinect to send commands through Arduino to the servo motors of the robot. Project by Guilherme Martins, Pedro Salgado and João Gonçalves.

Teleforma – Project by Ricardo Lobo, João Gonçalves and Mécia Sá dealing with the relationship that people have with speech and conversation. The project is based on a mechanical physical interface that allows two users to translate visually the form of their speech.