Day 6 started pretty late. At 10 o clock we had a mini makerbot workshop to replace a broken extruder piece, but most folks were still asleep from staying up till late working on the Piano Cocktail, so only Catarina and Guilherme managed to attend and fix the broken piece.

Late arrivers João, Vitor and Mécia arrived shortly after while i tried to finish up some work on the haiku generator and Mauricio was working on the keyboard mischiefs with Catarina. Guilherme was already gone, he had to prepare his work for the Talk Show piece downtown. A little while later Mónica and Francesco decided to join us in discovering where Blackbox was actually, we got abit lost but managed to all arrive on time. 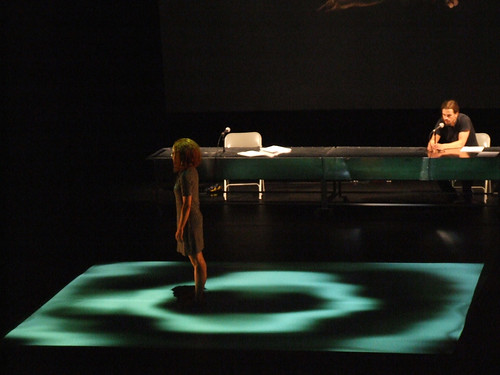 The piece was pretty great! Well produced and performed! So props to the ones involved was in order and back we went to our residency for some food and project pushing. Guilherme and Catarina still messing with the Makerbot; Mónica blowing plants; Filipe, Ricardo and Mauricio finishing up the Piano Cocktail; Luis and João working on the meal tracking ballet system; Pedro helping out Jorge with his Arduino issues; and me trying out a couple new remixes of the remix.

Before dinner we also had a short visit from a few performance related folks, seemingly guests from our host and friend here at Espaço do Tempo, Rui Horta. They seemed pretty interested in our adventures with the new technologies, especially in terms of networking and open source mentality. 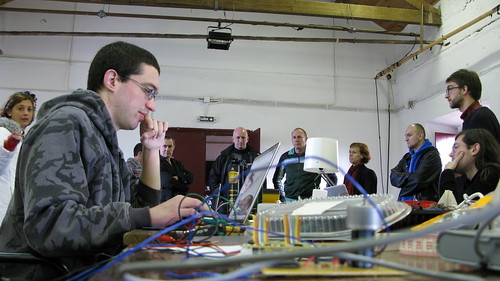 There was no catering on Saturday aparently, so things were abit more erratic but it all worked out in the end. We managed to organize a nice dinner event with nearly everyone present, and proceeded directly to judging the world famous Vitor Espadinha “Recordar é Viver” remix compo, participating was me, Sérgio and the proclaimed winner mister Pedro Ângelo.

90’s electro night proceeds as i type, everyone seems to be happily working on their projects and/or enjoying their refreshments. It sucks hard that tomorrow is the last day already. As a curiosity note, it seems 95% of the folks here at the residency use Mac’s, even if one of them does have Linux installed.