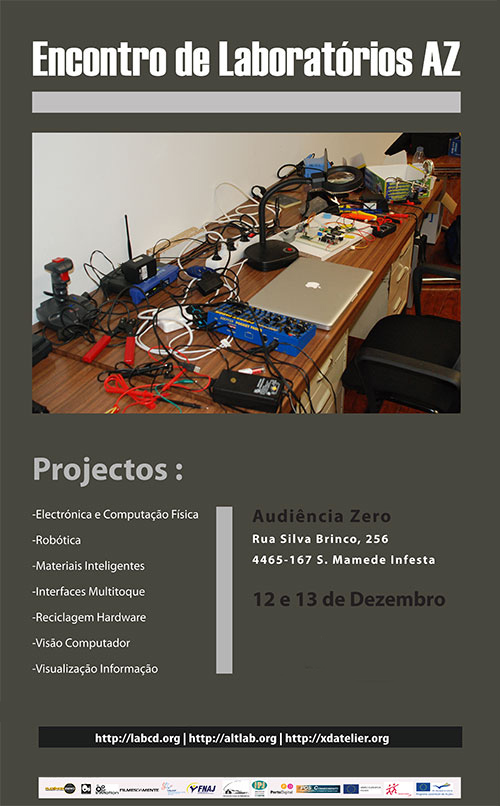 On December 12 and 13 we’ll hold the first big meeting of AZ’s 3 labs: LCD, altLab, and xDA. We’ll all get together in Porto, at AZ’s headquarters, for 2 days of creative and fun hacking. The main goals for this hackmeet are to share knowledge, explore synergies, collaborate, research, and… (of course) hang out!

AZ’s hackmeet is mostly meant for lab members, but others are also welcome to join in provided we have enough spots left.

News report from the forefront of ubber geekness ^^ No we didn´t launch a DIY open source space-station,.. just yet. What we did do is assemble 2 Cupcake CNC´s from Makerbot Industries.

News report from the forefront of ubber geekness ^^

No we didn´t launch a DIY open source space-station,.. just yet. What we did do is assemble 2 Cupcake CNC´s from Makerbot Industries. MakerBot Industries is a Brooklyn NY based company, founded in January 2009 by Bre Pettis, Adam Mayer, and Zach Hoeken. It´s a very young company indeed, and they must be one of the few companies based entirely on open source hardware. Now, what is the Makerbot Cupcake CNC ? It´s an open source 3D printer rapid prototyping machine. It´s a cute little machine that fits on your desktop and unlike a normal printer that only prints in 2d on flat paper, this one prints true physical objects in ABS plastic. It´s a robot that makes things ! How does this work ? You design your thing in 3d software, send it to the Makerbot Cupcake and some time later your thing exists for real, in real plastic, strong and durable !

Some of you pro designers out there might say, well there is nothing new about this, rapid prototyping machines have been around for some time now, yes you are right, but until recently these type of machines where proprietary and very expensive with prices ranging from 20.000 € and upwards and certainly didn´t fit on your desktop. This was true until Dr Adrian Bowyer, a Senior Lecturer in mechanical engineering at the University of Bath in the United Kingdom, founded and invented the RepRap Project. As it happens, Dr Adrian Bowyer is one of the seed investors of Makerbot Industries. DIY open source rapid prototyping for the masses was born. Now you can have your own machine for less then 700€, or even less if you recycle some motors from old printers and you´re handy enough to saw some plywood into a nice looking box. Being the geeks we are, we had to have one of those machines, so many times while working on projects we wished we could make a mounting bracket for this, or a support that could hold that, or that we could just have this cool figure we modeled in 3d software for real to show it off to our friends or offer as a gift to our beloved ones. The need was clearly there, and what better way to fulfill that need then inviting one of the founders and inventors of Makerbot, Mr. Zach Hoeken to host a 2 week workshop on building and using a Makerbot Cupcake CNC.

We were very lucky in finding just the right place to hold the workshop the “Faculdade Arquitectura – UTL” in Lisbon, a central location and thus easily accessible to participants coming from all over Portugal, we even had the visit of a proud Makerbot owner from Spain. Besides it´s ideal location, we had great support from the local Professors who participated in the workshop, it was great to witness their motivation and dedication to the project.

Thanks to Mr. Zach´s patient guidance and extreme knowledge, it took us only 8 hours to build the 2 machines. Zach divided us into 2 groups per machine, the machine consists of 2 main parts , the casing that holds the 3 moving axis X Y and Z and the electronics to drive them, the other main part is the extruder aka the “Plastruder MK4“, this is the bit that will pull the 3mm ABS filament and heat it up to 220 °C, this guy is the ‘printhead’ for your Makerbot, It has a beefy motor. This is also the same extruder that you would use for a RepRap machine and was developed by Makerbot Industries as a part of the RepRap project. As if by magic the groups worked in syncro mode, so that when the individual parts where ready, it was just a matter of assembling them into nice looking and ready to print Makerbot Cupcakes. A few more hours where dedicated to test and calibrate all the elements to make sure they worked well and printed nice, it was so cool to see the machines up and running and to feel the excitement and awe of the greatest magic trick ever ^^

Now what ? Get printing of-course ! Getting a virtual 3d model ready to be printed for real is not as easy as hitting print in your text editor, but it´s not rocket science either, there are a some things to know and a few tricks to learn, luckily our workshop host Zach knew it all and had quite a few tricks up his sleeve which he generously shared with us, It didn´t take long before we all had something ready to print. Before you can send your 3d model to the Makerbots, you have to export it from your favorite 3d app as a .STL file, if your fav 3d app doesn´t export .STL , no worries, Blender to the rescue! Blender is a splendid open source 3d application that can read most 3d file formats out there, for sure you´ll find a file format that´s compatible with Blender, once in Blender it´s a breeze to export your 3d model in the right format. Besides exporting in the .STL format, Blender is handy for a few more things, you can easily get rid of any doubled vertices, check for Manifold mesh errors, and reduce your polygon count (decimate) to improve printing speed.

Some of the participants where advanced 3d artists, and some never had touched 3d software before, but the truth is that we all managed to achieve some amazing results, and we were all very impressed by the quality that those little machines where able to produce. Not all prints came out perfectly at the first go, and here and there some operator errors where made, that resulted in having to unmount the Plastruder to clean it´s little teeth, which by the way is done in less then 10 minutes, unemployment due to technical fault just gives you enough time to get a coffee, only if the coffee machine is just around the corner. For me personally this has been one of the best workshops i´ve participated in, all participants where highly motivated and eager to learn and share, the ambience was all about sharing and caring, how could it not be when you´r discovering the amazing world of Makerbotness, and you have a great host like Zach to hold your hand 😉 Thank you.

Please head over to Zach´s post to see some great examples of what has been printed during the workshop.

Keep an eye out on the blogs from the AZ-Labs (AltLab, xDA, LCD) for more news on upcoming Makerbot adventures, including more workshops and how to get access to our Machines to print your stuff.

This summer I was a resident at NYC Resistor (NYCR), a hacker collective based in Brooklyn, NY. I’m now back home in Lisbon and would like to share a brief round-up of this wonderful experience.

First of all I must mention how incredibly welcoming and fun all the members of the collective are. Not only did they let me share their space for two whole months, providing me with a great learning opportunity, but also made me feel at home among them and showed me a great time.

I was lucky to get there just as their Awesome August challenge was starting. The idea here being that NYCR members challenged each other to finish one great project until the end of that month. The projects were indeed awesome, from an Eight Foot Lite Brite, an FPGA-based DNA sequence alignment accelerator, a Monome, a Player Toy Piano, and some very civilized smashing… to name only a few.

Another of my favorite staples, and the one I think I’ll miss the most, was Craft Night. Every Thursday evening NYCR opens its doors to those of us “who like to make stuff… so you don’t have to make stuff by yourself.” On these nights, NYCR members help visitors with their projects by sharing tips and knowledge, and everyone just has a great time working together around one big table.

And then of course, there was the unforgettable Interactive Party, during which some of Awesome August’s projects were shown, and that even included a giant robot cake, chalk drawing on the floor, a Wimshurst machine, and crayola model magic.

NYCR is currently offering a series of really interesting classes, which I’m very sad to miss.

During my residency I worked on a few (really fun) experiments with paper/cardboard pulp and soft circuits, as well as other (frustrating) ones with carbon nanotubes. More on that later – I’m still unpacking 🙂