Yesterday’s dinner didn’t go so well. We went to pick up a few doses of “Mistos de Porco Preto” (means something like Mix of Dark Pig in English) at this local restaurant which we had scouted on Tuesday as serving pretty well. But we had an unfortunate surprise, they under-served us half our dosage. So a new quest had been unlocked: to retrieve our fair share today or raise havoc!

At the lab i had no idea what happened during the morning since i slept until very late, but right after lunch everyone scattered off to handle different things:
– Sérgio and Francesco still busy documenting their ants project.
– Tara with the plastic PCB experiments.
– Jorge putting the finishing touches on his VJ mixer frame.
– Mónica pushing her wind/fan project into a first protoype.
– I pushed the genhaiku abit closer to version 2.0
– Luis arrived to the residency to work on his meal tracking idea.
– Ricardo and Filipe went on a magic journey to the local “sawmill” store to get the last parts for their piano cocktail.
– Mauricio gave us a workshop about tiny solar robots with BEAM circuits.
– And Catarina hacking some keyboard interfaces

So for dinner we went to reclaim our lost dosage of Mistos de Porco Preto and managed to succeed in our ordeal! Quest complete! We also took the wonderful opportunity to shop some essential refreshments for tomorrows farewell party.

Back at the residency we had visitors from a local juvenile theater group, we gave them a quick tour round up of all the stuff we have lying around and the projects people have been working in. Which went pretty well, they were all pretty marveled and excited with all we had going on, asking how they could do their own and spend the rest of their lives doing what we do. Which made us happy.

The rest of the night was spent attending Mauricio’s workshop and working on some entry for our fast music remix compo of Vitor Espadinha’s “Relembrar é Viver”. Results should be available tomorrow. 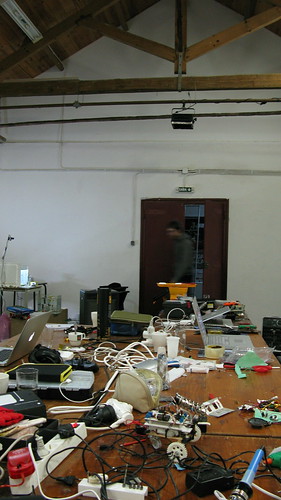 Today we haven’t done anything at all. Nah, just kidding. We seem to have grown well adjusted to our new home, the days are almost routine and the nights grown more social, everyone seems to be so tired that work on projects after dinner doesn’t quite work out as imagined.

New ideas for projects still pop up every other second but we’re now slowly starting to focus more on specifics. Pedro seems to be nearly done with the OSCBus link to Pachube. And Francesco seems to be polishing up his ants project some more, atleast it was rumoured that we can already get some inputs from both the fish and the ants for our promised audio mischief sessions. We haven’t quite managed to have some of those yet, but we definitely will. We should also probably connect it to AssaultCube, just to reuse late night gaming pwnage from our gamer residents.

Sérgio managed to get the hall lights also synced up to OSC so it’s now clear that complete and total world domination is eminent.

Filipe has been busy with his secret new projects and also pet-sitting his fishies, who seem not to be doing so great, probably new water tank related, so they’re getting a new one tomorrow!

Jorge been busy all day building a frame for his VJ mixer, it’s looking good by now, just wish my brain could already be able to filter the dremel sound by now!

Catarina and Tiago tried to assemble a new breed of TV-B-Gone’s, but seem to have failed miserably so far. Hopefully tomorrow they’ll succeed in a little more than just finding all the possible ways that it won’t work and we’ll have something more to show and tell to the world.

The bioplastic sample tests have been somewhat neglected but we promise we’ll report something back about them. Guilherme has returned to the residency and seems to be working on some evil plans for world domination for his robots, we hope to have some follow up info on that in the next few days aswell.

All in all it seems that the daily project meetings have settled down to lunch hour. Which fluctuates. And excursions to the random local shops are now common atleast twice a day. This carefully devised and heavily pondered time management scheme is easily enabling us with the latest cutting edge technology, which allows us to put together something as exquisite, brilliant, innovative, revolutionary and so righteously dedicated.

The breakfast table side projects meeting seems to have jetlagged slightly to lunch hour. Cold water morning shower is truly revitalizing but i wouldn’t want an encore tomorow! Despite the early shock some folks clearly fueled with their sleep deprivation managed to come up with a few other project ideas to add to our pool. Among which we seem to have a top secret facebook junkies clothing line and a not that top secret Boris Vian piano cocktail idea revamp, for the drunkards in us all to rejoyce aplenty about (related electro valve experiment documentary picture below).

So an excursion to the local city store was in order, visiting random local Chinese stores, hardware stores, textiles store, pet stores, electronic materials stores.
BTW, you should know that using a multimeter to pick a zipper at a textiles store might get you kicked out!

Meanwhile, in a land far far away, Tara has been very busy ironing a few random plastic bags to create a DIY PCB prototype and successfully unravelling many distinct ways on how it will defnitely not possibly work! Plus discovering an advanced paper printing technique. Follow up should come within the next few days. We hope.

Tiago Serra and Jorge Ribeiro from xDA have also arrived tonight, so our dinner plans also involved a little brainstorming on all of these ideas and more top secret ones TBA. Meanwhile here is another random silly photo: 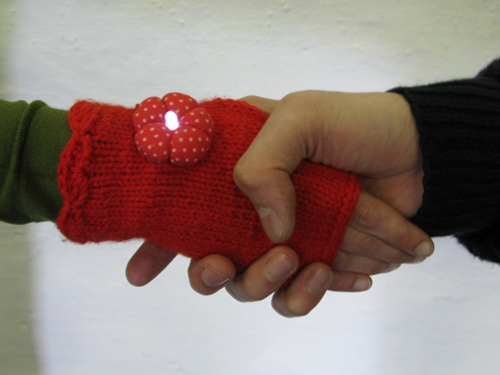 This mitten lights up when its wearer shakes hands with someone. It has two exposed soft contacts around the thumb and across the palm which, when bridged by bare skin, turn on the LED embedded on the flower. The mitten itself was created by fashion designer Isabel Tomás, and we then sewed a simple touch switch circuit onto it using conductive fabric and thread. It also works with high fives and holding hands 🙂

Isabel and I designed this as a soft circuits exercise for some upcoming materials workshops. You can find all the instructions and images we prepared for this purpose @ openMaterials:
http://openmaterials.org/2010/03/03/making-a-glove-that-lights-up-with-a-hand-shake/

Day started with a small queue to access the showers and a breakfast table side projects meeting.

Most of the goals were reached despite the usual setbacks. 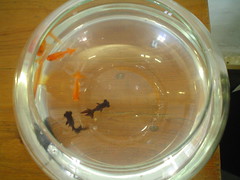 Bioplastic is sick. It’s basically starch, water, glycerine and vinegar stired together and heated slowly to a pasty bubbly form that takes a day to strengthen up. Today we cooked a few variations of the standard recipe to make a few sample experiments with different ingredient ratio, cooking time and thickness, to compare the properties and possibly maybe probably figure out some interesting use for them in future projects. They take about a day to cure, so we have no conclusions just yet, but we’re all pretty sick of the smell of vinegar by now! Stay tuned for the follow up, coming to an hackerspace blog near you soon.

Fish are nice. We like fish. Filipe brought some with him and seems to be planning some cute tracking system installation. A crack in the main experiments tank hold him back a few hours while the silicone patch dried up, so it isn’t quite operational just yet, but we’re already working hard on the next evil step for world domination: devising a clever way to centralize and reuse his little fishies tracking values. And share them with the world while we’re at it. Who knows who might need a bowl fish tracking stream of values out there.

We took a little walk wandering about Montemor-o-Novo, quite a peaceful town as it turns out, we managed to find an open restaurant with some excellent traditional Portuguese food, which was nice. Meanwhile, back in the new tech world, our plans for tonight’s generic audio mischief jam got held back by the lack of a mix table, some lag with ninjam wireless and an allnighter live broadcast stream pumping out of Autechre‘s website.